It’s inevitable that sometimes you are on a tight deadline and in a rush to get things done. You take shortcuts so you can get the job out the door. Whenever you are pushed for time, it’s easy to fall into bad editing habits. But bad habits have a way of compounding and getting worse. Here are a couple of bad editing habits that I have made an effort to stamp out in my own workflow.

Bad Habit: Opening a Project within a Project

Scenario: You are busily working on one project but someone needs you to do a quick fix on something else. Let’s say a logo replace and minor cutdown. You don’t have the old project, so you are just going to import the Quicktime and do a little patch up.

It seems like such a small job, why not just open up a folder in the project you’re currently working on and do it in there? You spend an hour or so making the changes – importing a new logo, fiddling with the transition where you made the audio cut and whatnot. Once you’re done, you return to the project you were originally working on.

Now it’s months later and the client is back with more changes. But you can’t remember where you saved the last changes because they were inside another project that you have long since finished. You waste time opening up old projects to see if you can find your old “project within a project”…then eventually give up and start again.

I once worked in a large production company where my time was booked out to multiple producers, sometimes in two-hour increments. I was constantly switching projects and it wasn’t uncommon for the producers to swap favours with each other and jump the queue to get urgent little changes done. I got into the bad habit of doing changes on the fly in whatever project I was in.

Thankfully it didn’t take me long to realize that this was a very bad habit and to stop doing it altogether. The best-case scenario is that the project will still be active and you can make the changes within that project so that everything stays together. Although it can seem like you are wasting precious time opening and closing projects, in the long run it is time well spent. If the project is no longer active, then start a new project. Even if it seems like it will be the tiniest, most insignificant change that it barely seems worth it, it’s still not a big deal.

If you have a project template set up (which you absolutely must….and I will blog about that soon) it will take no time to duplicate the template and have a properly set up project that you can return to at anytime to revisit the changes. Make it a habit to never start a project within a project. 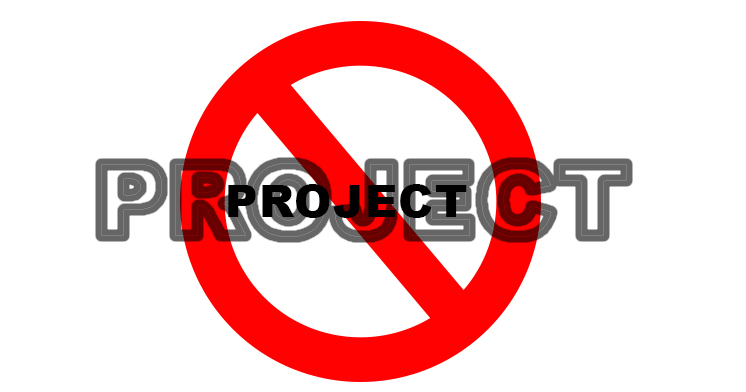 Bad Habit: Pulling Media from Here, There and Everywhere

I have to admit, I am so fussy and pedantic when it comes to filing and media management that I have never let this become anywhere near a bad habit, but I am still guilty of the occasional infraction. Whether you work from home on your personal computer, or work in a huge production company with multiple server volumes, you still must keep all of your assets localized in the project folder. This brings up a whole other topic about doubling up media when sharing resources…but for the sake of argument, let’s work with a fictional project were all of the assets are unique to the project.

So let’s look at some really bad habits in media management. Imagine that you are creating a three-minute video that incorporates some interview footage, stock overlay, music and graphics. The camera person gives you a hard drive full of rushes, you visit a couple of stock websites and pull down some nice shots and you grab a few music choices from your iTunes library. Later the client emails you the graphics and a link to download an animated sting. Where are all these assets living?

The right answer is that they have all been filed into the project folder, whether that is on your local drive, a server or an external hard drive. The wrong answer is that some are on your desktop, some in the downloads folder, the rushes are off a hard drive and music dragged straight from iTunes. Bad habit!

After years of refining, I have discovered that this is the ideal root folder structure for my projects. Everyone has different requirements, but I have found that this covers all of the main components of a project and flows logically through the process from Pre to Post Production.

Saving increments of your sequences is a smart way to work. Sometimes you may go down an editing rabbit hole and decide that you want to return to an earlier version. Sometimes you delete a piece of narrative that you find you actually need later. Invariably the client will come back with changes that you need to action. So you will always have more than one sequence. At the completion of the project, one of these sequences will be the master. Not naming your sequences clearly and sequentially is a bad habit.

Over time I have developed a set of habits as an editor that have become integral to the way I work. Once an action becomes habitual, you don’t need to think too much about it – you just do it. That is why it is so important to make good habits instead of bad ones.

One of the best habits that I love to share with other editors is renaming rushes. Before I even open a project, I take a little bit of time organizing my shoot rushes into the most useful form depending on the job. If it is a multi-day shoot, I will firstly organize all of the rushes into shoot days. This is most useful as Producers, Directors and Camera People will most often refer to the shoot day when they are trying to describe a piece of footage that they are after – “We need to find shots of that guy we interviewed on the second day” or “Let’s look at the overlay we shot on the first day”.

If it is a single day shoot, the root folders will be the cameras. Often times this may just be “Camera 1” and “Camera 2” but sometimes it helps to name the folders by the model of camera as it often easier to locate the footage this way “5D” “7D” “FS700” etc.

But while it is an excellent habit to get into structuring shoot rushes into these folder systems, you can go a step beyond and rename all of your rushes so that every piece of footage can instantly be identified by the name.

Don’t be scared of how long the file name seems. Once you work out a system, you can use abbreviations. The project name can be shortened to a single word if it is long winded, or even a job number if that is more helpful.

Also, you will only need to type the info in once if you use renaming software, which I highly recommend that you do. A while back I stumbled upon a fabulous application called “Name Mangler” by Many Tricks http://manytricks.com/namemangler/ It costs about $20USD and it’s worth every cent. It’s super easy to use and it can rename hundreds of files at a time. If you spend just 10 minutes renaming your rushes before you get started editing you will be continually rewarded down the track.

Looking at a sequence stacked with multiple layers, you can see at a glance which camera source an individual shot came from by showing video clip names or revealing the source in the project and quickly reading the info contained in the file name.

Months down the track, if you are searching your drives for footage, typing in the project name or job number will bring up all of the rushes files. You couldn’t do this if you left footage named as MVI_9876.

Plus there is something extremely gratifying at looking at neatly labeled files and also knowing exactly how many files there are when they are numbered sequentially.

Bonus Tip: When numbering, always use a 00 prefix.

If you just use numbers without any zero prefix, the computer will stop organizing sequentially after 10. Also, I like all of the filenames to be exactly the same length, which they wouldn’t be with single and double-digit numbers. I always double zero as my files may number over 100. If I thought I’d have files over 1000, I’d use a 000 prefix.

Finally, it’s a good habit to always use underscoring in file names.